Indica and Sativa are Dead: The Quest for a New Cannabis Classification System 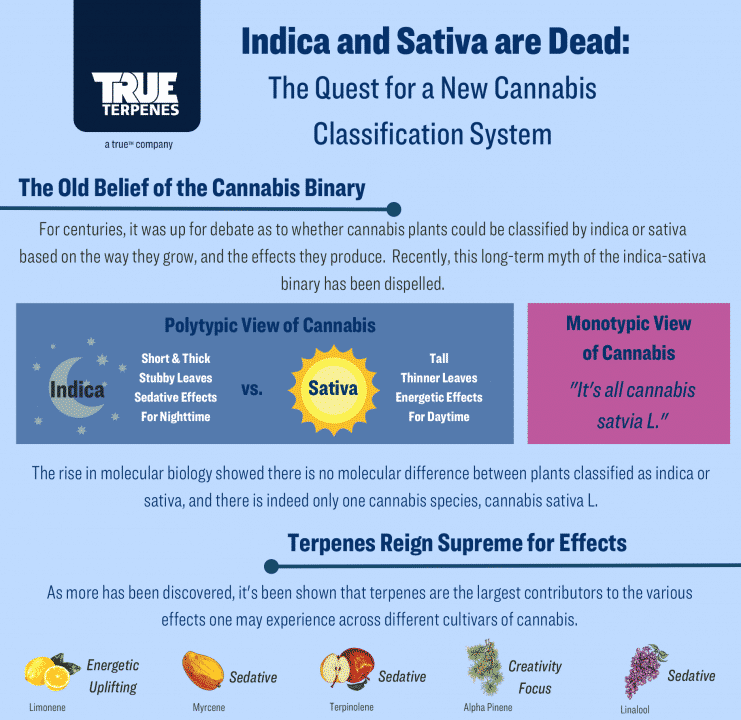 They say it’s hard to teach an old dog new tricks; for the cannabis industry, it’s proving to be next to impossible to get producers and consumers alike to move away from the age-old dichotomy of indica vs. sativa.

For centuries, cultivators and consumers have categorized cannabis cultivars (strains) into two categories, with hybrids relatively newer addition to the binary. In the general sense, cannabis products labeled “indica” are believed to produce sedative, calming (“in da couch”) effects, while those labeled “sativa” are associated with more energizing and euphoric effects.

However, as we learn more about cannabis, we know that such a binary oversimplifies an incredibly diverse plant. Now, cannabis scientists are looking for new ways to re-classify cannabis so to aid consumers in choosing the right products to match their desired effects, and it all hinges on understanding terpenes.

The Origins of the Cannabis Classifications Binary

In the 18th century, scientists made the classifications of indica and sativa for the cannabis plant, which was revealed to be from the Cannabinaceae family of plant species. While it was agreed upon among scientists that cannabis’ botanical name was cannabis sativa L.,in 1783, French biologist Jean Baptiste Lamark was the first to bring forth the idea that “cannabis indica” was another form of the plant. The idea that there is more than one type of cannabis came to be known as the “polytypic view”.

In Lamark’s belief, indica plants appeared to be short with thick, stubby leaves, while sativa plants grew tall with thinner leaves. Lamark concluded that these biological differences in the plant types equated to different uses and effects. It was later believed that indica plants matured faster than their sativa counterparts, even under similar conditions. It was also posited that the different types had different smells, later recognized as different terpene profiles.

For over a century, various publications emerged across the world that either stated cannabis was a polytypic or monotypic plant. In 1838, Lamark’s claims of “sativa and indica” were refuted by British botanist John Lindley, who saw no reason for the plant to be classified into such a binary, holding on to what was known as the “monotypic view”.

In 1970, Richard Schultes, a prominent Harvard biologist, first wrote in support of the monotypic view of cannabis, only to change to the polytypic view just four years later. One California man even tried to use the polytypic view to convince courts he was not selling a “drug” and only a different form of cannabis than the psychoactive plant they had always known, with the court ruling in favor of the polytypic view. This flip-flop of indica vs. sativa vs. no classification at all remained a point of contention that still pervades in the industry today.

The rise in molecular biology allowed researchers to conduct molecular testing that would reveal that the indica vs. sativa binary was completely wrong when the plant was broken down at the molecular level. It was revealed that despite any indica or sativa classification made due to growth patterns or other attributes, there is no molecular difference between the two dichotomies, and there is indeed only one cannabis species, cannabis sativa L.

While some attribute growing conditions to the differences that make up plants and their effects, most modern cannabis connoisseurs and cultivators now recognize that it’s terpenes that determine whether a cultivar will have the consumer excitedly vacuuming the entire house or sinking into the couch to binge-watch an entire season of a TV show.

Additionally, terpenes are now being increasingly researched for their medicinal and therapeutic properties, with the general belief that certain terpene profiles produce specific medicinal effects.

Much of the rise of our understanding of terpenes can be attributed to Dr. Ethan Russo. He positioned in 2011 that cannabinoids and terpenes worked in synergy through The Entourage Effect, following that up with a 2019 publication that examined different synergies between various terpenes.

The Entourage Effect has become a household concept within cannabis. Most connoisseurs understand that terpenes and cannabinoids working in harmony are much more effective than terpenes in their isolated form.

More recently, efforts have been undertaken by Dr. Russo and his colleagues to re-classify cannabis cultivars by terpene family, or what is being called “terpene superclasses”, grouping cannabis strains by their dominant terpene, and thus effect.

Canadian researcher Phillippe Henry studied the structural overlaps of these terpenes, proposing a new classification system that hinges on the terpenes myrcene, limonene/beta-caryophyllene, and terpinolene. Henry was able to narrow down 18 SNPs or single nucleotide polymorphisms from 1400 that could help classify cultivars into a terpene family. SNPs, in their simplest definition, are the DNA or genetic variations that account for the uniqueness of different organisms, including terpenes.

Dr. Russo has taken the concept of terpene superclasses and has translated it to Terpology® with True Terpenes, which are customized blends of terpenes that are designed to bring about a specific effect such as “calm” or “focus”.

As cannabis becomes more understood, it becomes more apparent that we indeed need to move away from the dichotomy of indica vs. sativa, and rely more on terpenes to help us classify cannabis cultivar by effect.

Sadly, the cannabis industry at large keeps perpetuating the polytypic indica and sativa myth by labeling products as such, yet at the same time, consumers are becoming more astute to different terpenes and what they do.

Embracing terpene superclasses is an excellent start at recognizing the properties of cannabis that elicit a certain effect.

Producers and stores owe it to their customers to educate about terpenes and why something labeled “indica” or “sativa” may produce a different effect than expected. At the same time, brands can refrain from taking too many liberties in strain names that leave the consumer confused and unable to research which terpenes are contained within. Although a revered skill for geneticists, crossbreeding also muddies the waters when trying to discern terpenes.

In response to a more astute consumer, there has been a notable rise in brands providing information on terpenes on their labels, which helps the consumer in their process of trial and error to understand which terpenes, or terpene blends, create their desired effect.

Indica and sativa are dead, and it’s time for the industry to hold a funeral for these archaic concepts. Explore more about terpenes, and their effects, through True Terpenes’ Shop.

Looking for Innovative Flavors or to Create a Customized Blend?

True Terpenes leads the industry in showcasing how terpenes can be a dynamic factor in customizing and standardizing the aromas, flavors and effects of its customer’s lifestyle products. With extensive expertise in formulation and application we can help you match, improve or develop custom blends.

Click on the link below to get started on building a competitive edge with terpenes.

Ready to Get Started?

True Terpenes, a fully owned subsidiary of True Companies, is the industry-leading producer of effects-based, GMP/ISO/FSSC-certified terpenes and terpenoids blends. Using ultra-refined botanical terpenes and other aromatic compounds, the custom terpene blends are used for beverage, cannabis, cosmetic, food, industrial and pharmaceutical products. The company uses advanced scientific analysis to identify terpenes and other compounds in the cannabis plant for recreation by utilizing other botanicals and hemp-derived ingredients. This allows companies in various industries looking to leverage cannabis flavors and effects with a scalable, standardized, and worldwide legal solution.

PrevPreviousTop Cannabis Trends for 2022: All About the Terpenes
NextFlavors & Aromas in Cannabis: What’s After Terpenes?Next
Return to Main Blog