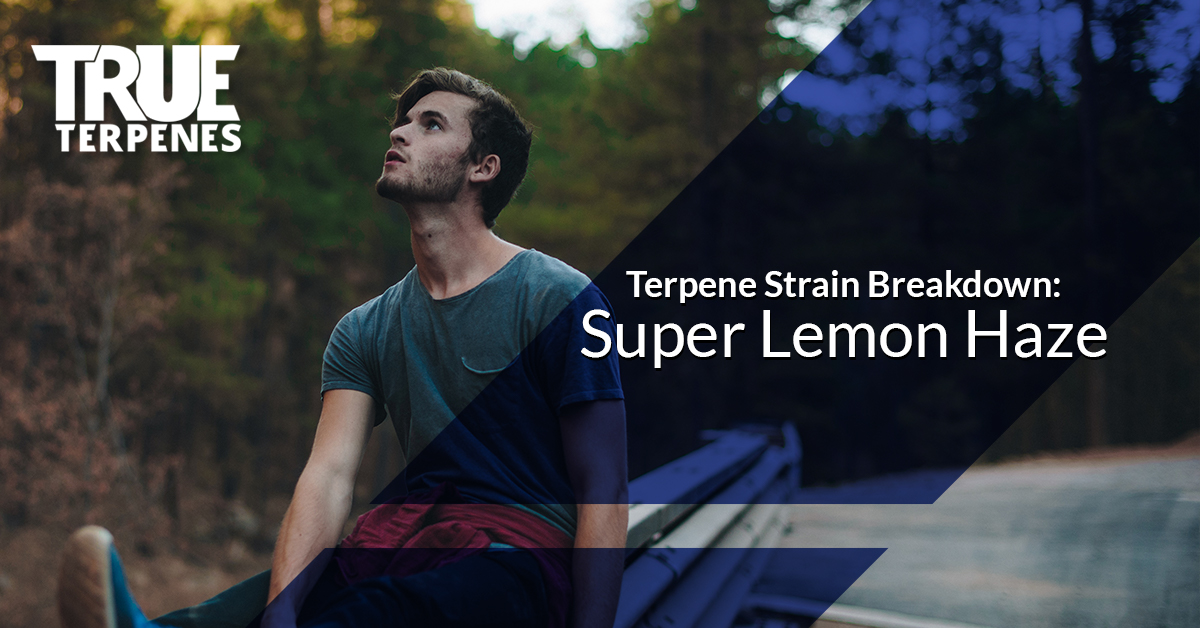 At True Terpenes, we offer the finest terpenes in two varieties—isolates and strains. Isolates are relatively simple; they’re specific high-purity terpenes that aren’t mixed with anything else. Strains, on the other hand, are terpene mixes blended together to replicate your favorite flavors with genuine authenticity.

When terpenes are combined together, their unique combinations can instill aromas and flavors that can’t normally be achieved by one terpene alone. If you’re looking for a more adventurous use of your terpenes, or you simply don’t feel like mixing and matching on your own, terpene strains are an excellent choice.

In today’s post, we’ll be breaking down one of our most popular terpene strains: Super Lemon Haze. Let’s explore how Super Lemon Haze’s creative blend of quality terpenes come together to create a taste that’s tart and sweet with the fragrance of fresh lemon citrus.

Let’s take a look at the five terpenes that make up the lion’s share of Super Lemon Haze’s mixture. These aren’t necessarily citrusy or lemony on their own, but when mixed together, they create the special taste that makes Super Lemon Haze one of our favorite terpene strains.

It might be surprising to see that Beta Caryophyllene is the most prominent ingredient in Super Lemon Haze. With a more natural woody aroma and a spicy-sweet flavor, it doesn’t exactly remind one of lemons on its own. Beta Caryophyllene is sourced from some of your favorite spices, such as black pepper, basil, and oregano.

This would explain why people often say that Super Lemon Haze has a happy and uplifting effect! The properties of Beta Caryophyllene are an essential ingredient to that recipe.

Terpinolene is a very popular terpene that’s frequently used for flavors and fragrances, particularly in topicals such as soaps, creams, lotions, and perfumes. It carries a strong and sweet aroma that has hints of, you guessed it, citrus! There’s none to be found in Beta Caryophyllene, so it had to come from somewhere. Unlike the latter, Terpinolene carries somewhat of a soothing effect, though this aspect doesn’t carry too strongly into Super Lemon Haze, which typically leaves people feeling soaring and energetic. Some popular sources of terpinolene are apples, cumin, lilac, and pine.

While Humulene isn’t quite as prominent as Terpinolene and Beta Caryophyllene, Super Lemon Haze’s main ingredients, it’s an important terpene ingredient nonetheless. Some of its more well-known natural sources are ginger, sage, and hops, and it has long been known to be an effective treatment for discomfort.

While Ocimene only makes up a small portion of Super Lemon Haze’s terpenes, it’s an important contribution to the citrus that can be detected in its scent and taste. Ocimene can be naturally sourced from the unshiu flower as well as kumquats, which are both citrus plants. Taking cues from Humulene and Beta Caryophyllene, Ocimene also helps ease discomfort effects. No wonder Super Lemon Haze makes people feel so good!

If Ocimene and Terpinolene weren’t enough, the very citrusy terpene Myrcene takes it the rest of the way, being a significant source of the tart sweetness of Super Lemon Haze. Even though Myrcene is only a small component of the overall strain, its contribution does not go unnoticed. Myrcene is actually a very popular terpene in other strains, and it’s the most prevalent terpene that’s naturally found in the majority of cannabis variants. We love the discomfort-relieving properties that Myrcene carries, as well as its help with seasonal problems.

It’s amazing how much strain we put on our body without even realizing it. The foods we eat every day, the activities we partake in, and small daily habits slowly take small tolls on our body that are so gradual we don’t even realize they’re happening.

Some of the words that are often used to describe the effects of Super Lemon Haze are “happy,” “uplifting,” and “soaring.” With all of the anti-inflammatory and soothing properties of the terpenes that it’s made up of, it’s easy to see why people feel this way! Sometimes the body just needs a break, and terpenes are an amazing source of relaxation. At True Terpenes, our naturally sourced Terpene strains can have a variety of positive effects for your well being. Browse our online selection today to try out Super Lemon Haze, and other strains that may be appealing to you!