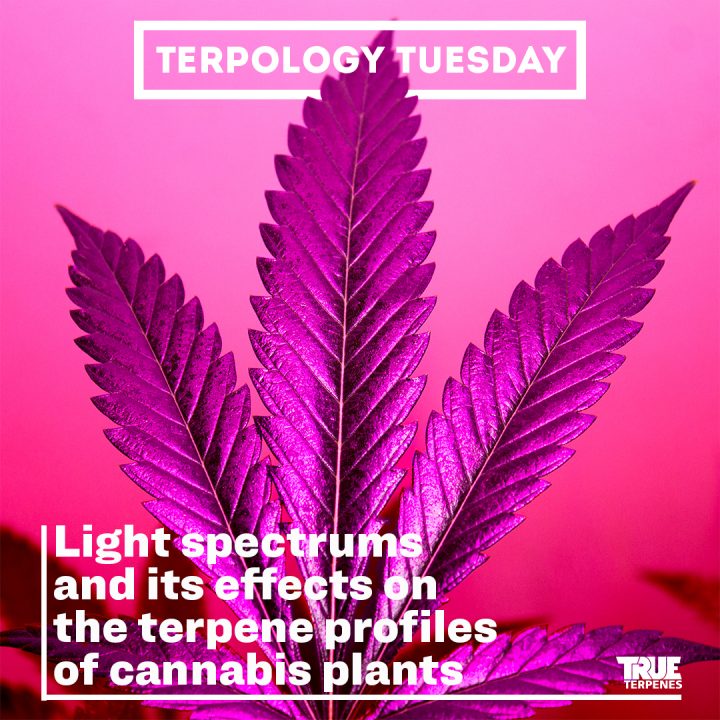 The University of Guelph is lighting the way on cannabis cultivation and terpene science with their newest study.

Scientists from the University of Guelph, an agriculture college located in Canada, are studying the effects of supplemental light from below the canopy on cannabis cultivation. They looked at the bud to plant ratio, cannabinoid contents and importantly, the effects on terpene contents.

But before we get ahead of ourselves, let’s set up the experiment. The cultivation followed typical protocol including an overhead light. However, the researchers added LED lights below that were mounted to the pots pointing up into the plant canopy. The LED lights utilized 2 spectrums: red/blue (RB) and red/blue/green (RBG). They also ran two crop cycles for results.

In both crop cycles, both RB and RGB treatments significantly increased the ratio of bud to plant. Furthermore, the total yield of flower/bud increased under both light treatments. RGB lights produced the largest yields, with the scientists theorizing that was because the full RGB spectrum had a higher light density.

The added light from below also changed the terpene profiles of the plants, but more specifically it caused variations between the upper and lower canopy that weren’t found in controls.

The researchers reported that they believe the supplemental light, especially in the RBG spectrum may be providing higher amounts of a spectrum that terpenes themselves are normally absorbing in trichomes before it hits the plant. By adding light of that spectrum, the plant then compensates by creating more of those terpenes to act as a sunblock. A similar process explains why anthocyanins (dark plant pigments) are created. They block harmful wavelengths of light.

However, several other studies report that in many species of plants red, blue and green light also regulate phytohormones which are responsible for defense and metabolites such as terpenes.

The scientists at the University of Guelph are planning more follow ups on light spectrums, cannabis and terpenes, according to their paper. It’ll be interesting to see what they turn up as the keep pushing cannabis science forward.