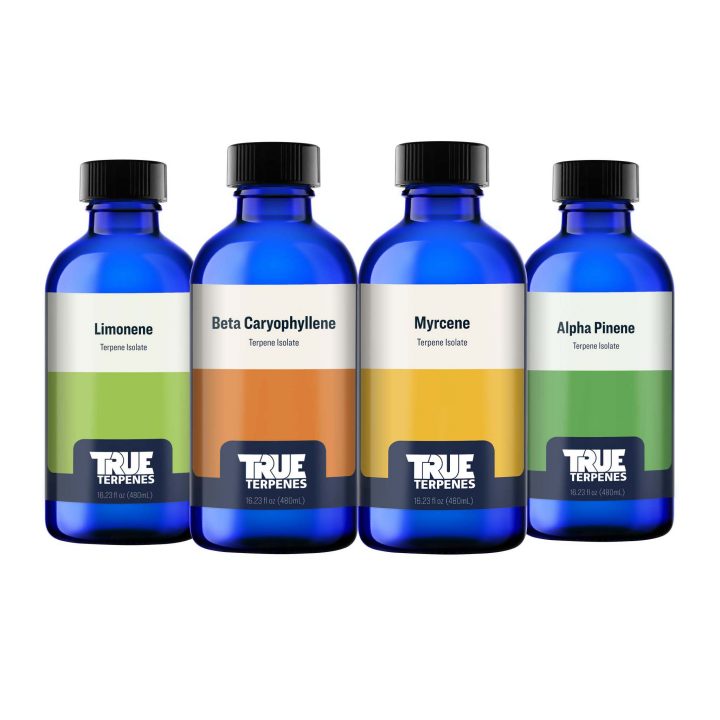 A client recently asked us for a quick description so they could start to familiarize themselves with the scent and effects of some of our Isolates. Here’s the per

Alpha Bisabolol, the major active component of Chamomile, might remind you of Grandma’s purse. Light, floral and a little bit of musk. Known to help soothe and used by many as an anti-inflammatory.

Alpha Pinene, like a walk in a Pacific Northwest forest, is full of sharp pine sap and woodsy notes. Pinene is known to increase focus and can act as a bronchodilator.

Beta-Caryophyllene, found in basil, pepper, and cinnamon. Known to have an aroma that is peppery, woody, and spicy. Familiar and unique all at once. This is the only terpene proven to interact with the endocannabinoid system.

Delta 3 Carene is sweet with an earthy aroma alongside piney undertones. Found in rosemary, cedar, and turpentine. Delta 3 Carene is widely considered a natural antihistamine. Popular uses include perfume and flavoring.

Eucalyptol comprises up to 90% of Eucalyptus oil. Also found in laurel, bay leaves, and tea tree. It has been shown to have anti-inflammatory and antioxidant effects. Eucalyptol has a fresh mint-like smell and a spicy taste, cooling sensory effect.

Humulene, another strong contributor to the tell-tale earthy aroma of cannabis, this terpene is present in hops and coriander. Humulene can act as an appetite suppressant, analgesic, and offers anti-inflammatory abilities.

Limonene, typically common in Sativa varieties, is associated with elevated mood and focus. Found in citrus rinds and other herbals such as Juniper. Limonene has a unique ability to quicken the absorption of other terpenes. A lighter molecule, limonene will typically flash off more quickly than other terpenes.

Linalool. Soft and flora, this scent is reminiscent of sharp and sweet wildflowers. Linalool is found in laurel, birch, and rosewood. Known to have calming and sedative properties, many look to this scent to reduce anxiety and help unwind.

Myrcene, described as earthy and musky this terpene is prevalent in nearly all strains of cannabis and is known to enhance THC uptake in the body. Myrcene is found in mango, hops, thyme, and citrus. Commonly used as an antibacterial, anti-inflammatory, and sedative.

Terpineol, sweet and floral. Due to its pleasant aroma reminiscent of lilac and flower blossoms, it is often used in cosmetic and flavoring products. Terpineol is known to be a good immunostimulant and has shown exceptional anti-bacterial properties.