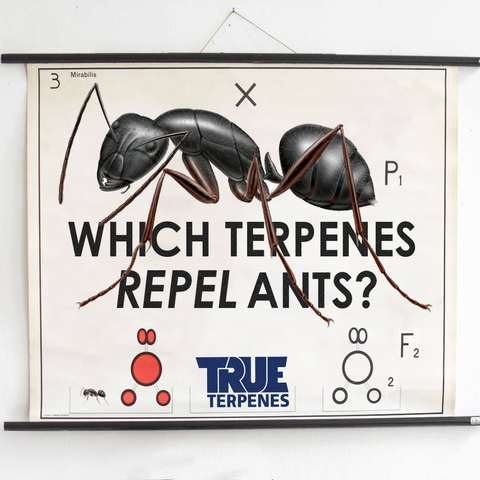 Last week’s Terpene Tuesday on the terpenes found in ants got a lot of response, and it also drew a lot of questions. One of the common threads was centered on the question: are there any terpenes that repel ants? According to some research it appears there are.

A study done in Argentina on leaf-cutting ants found that farnesol was able to repel them for up to five days. The researchers soaked wooden rods in a solvent (control) or farnesol. These rods were then offered as bridges to a possible food source. The farnesol treatment reduced ant numbers by 40% depending on treatment. The scientists also said that while orange pulp/fruit was a strong attractant, limonene and orange peel act as repellents. They theorized that sesquiterpenes in the peel or higher limonene content may be responsible for the difference.

Scientists in Europe used another method to determine if a terpene repelled ants. They actually used a chemical called mevinolin to reduce terpene production by the flower Phlox paniculata. The treatment reduced flower monoterpene and sesquiterpene content by approximately 30%. This reduction then decreased the ability of the flower volatile profile to repel ants. However, when they tried individual terpenes they discovered that linalool was responsible for much of the repellent effect.

Interestingly the repellent effect on ants of terpenes, seems to act oppositely on pollinators according to the same study. They found a non-statistically relevant, but still apparent small reduction in the visitors of pollinators in the flowers with reduced terpene levels. Still more evidence of the complicated, intricate communication happening between plants, animals and the rest of life through terpenes.