The cannabis species originated and was domesticated on the steppes in Central Asia. The origin story and family tree has been often debated. However, a recent review by cannabis botany leaders Dr John M. McPartland and Dr. Ernest Small is hoping to bring some clarification to help save the forebearers of all modern cannabis. The paper is entitled: “A classification of endangered high-THC cannabis (Cannabis sativa subsp. indica) domesticates and their wild relatives” paints a grim outlook for these progenitors of the species.

“Seen pessimistically, the varieties described here are components of a vanishing world, and classifying them is like an exercise in renaming dinosaurs. Optimistically, the formal recognition of indigenous Central and South Asian varieties will provide them with unambiguous names, and may help prevent their extinction.”

All cannabis plants are of the family and species cannabis sativa. For many in the cannabis industry Indica and Sativa have been the bedrock of how people communicate the morphology and subjective effects of the plant. However, science has begun to reveal that the chemovar, or terpene and cannabinoids, in the plant rather than the shape of the plant are better indicators of effect. Dr. Ethan Russo and others have written about this synergistic combination of compounds coined the entourage effect.

In this vein McPartland and Small contest that all cannabis sativa subspecies sativa are hemp fiber and seed crops with low THC contents, while all drug-type (THC containing) cultivars would be classified as Indica.

To make it more confusing cannabis sativa subsp indica var indica actually has the narrow leaf morphology associated colloquially with “Sativa” varieties. Additionally, the third subspecies of cannabis is cannabis sativa subsp ruderalis. Ruderalis is a wild variety that has low THC contents and is autoflowering or day neutral.

The biggest threats to these landrace cannabis varieties come from humanity. In the search for the best plants for effect, yield, resistance to disease and other characteristics humans have interbred these landraces. This process has increased with human technological advances increasing travel. In doing so endemic species are often impacted through reduction in seeds for reproduction taken by humans for breeding or cultivation. Further, this human cultivation often leads to artificial selection for traits such as resin yield rather than reproductive fitness or introduction of varieties from other regions. Overtime these varieties escape domestication and go feral, altering the gene pool of the native plants.

McPartland and Small detail a slew of records of these practices from the 1960s onward. One example is counter culture leader and cannabi breeder Jerry Beisler who claims to have introduced Mexican Gold into Afghanistan around 1972. These actions seem insignificant, but over time may erase the ancient varieties that sired them. 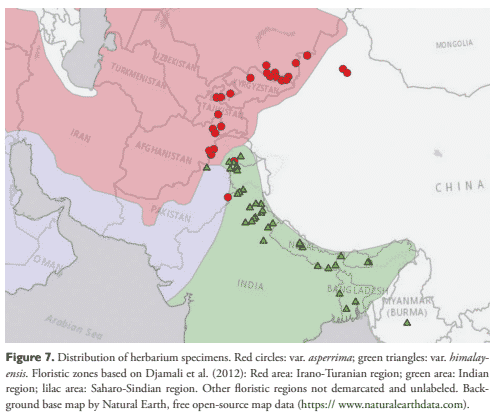 The cannabis industry and world at large will hopefully share the responsibility to preserve the biodiversity of the cannabis species. This will include protecting the habitat, reducing feral or escaped cannabis populations in its endemic range through Central and Southern Asia.

Another option to exporting, importing and harvests of wild or native cannabis plants and seeds is to recreate them locally through recombination. True Terpenes specializes in replicating the aromatic profile of cannabis varieties from analytical testing utilizing terpenes sourced from other plants: linalool from lavender, myrcene from lemon balm or beta-caryophyllene from clove.

Let’s take a look at some of the key differences in the four endangered varieties and identify some modern cultivars and True Terpenes profiles that are representative of the ancient landraces.

Indica plants originated around India, but are found throughout southern Asia. They are usually taller than 6 feet and have the narrow serrated leaf structure. The largest leaves typically have at least 7 leaflets. Indica plants have a higher than 7:1 THC to CBD ratio and have elevated terpinolene, β-caryophyllene, trans-β-farnesene, humulene and a-guaiene. According to reports they have an herbal or sweet aroma.

As indicated by the name, Himalayensis plants are endemic to the Himalya Mountain Range. They are closely related to the Indica variety. Himalayensis plants range from 3 to 9 feet tall. Narrow serrated leaf structure. The largest leaves typically have at least 7 leaflets. Himalayensis plants usually have a higher than 10:1 THC to CBD ratio, but there are also high THCV/CBDV plants in this population with much lower THC:CBD ratio accordingly. The terpene profile is similar to that of var. indica, except for higher levels of β-myrcene, cis-ocimene, humulene and β-caryophyllene.

Plants from Afghanistan and the surrounding area are referred to as Afghanica. Afghanica plants are under 6 feet tall, usually under 3 feet. Wider serrated leaf structure with 7–11 leaflets that are dark green. Afghanica plants have the highest combined THC/CBD levels on average of the varieties. Less than 7:1 THC:CBD ratios usually. The terpene profile typically contains higher levels of guaiol, γ-eudesmol, β-eudesmol, and the monoterpene alcohol nerolidol, as well as hydroxylated terpenoids, such as γ-elemene, a-terpineol, and β-fenchol. Reported to have a fresh, often acrid or skunky odor.

Asperrima are wild cannabis that range across Central Asia and the Middle East. Asperrima plants typically stay below 4.5 feet tall. Wider leaf structure with 5–7 leaflets, that are dark green. The THC:CBD ratio is typically below 5:1. The terpene profile is likely similar to that of the Afghanica, it’s closest genetic relative, but has not been reported in the literature.

While not mentioned as endangered in the study, rurderalis are a keystone in cannabis breeding and linages. Rurderalis plants rarely exceed 2 feet tall. The leaf structure is wide, but smaller and fewer leaflets compared to other varieties. Rurderalis is known for having a low THC content. The terpene profile is known to be high in myrcene, alpha-pinene, ocimene and delta-3-carene.

PrevPreviousHow Coronavirus is impacting regulations across the US
NextEntourage effect of terpenes in beer?Next
Return to Main Blog