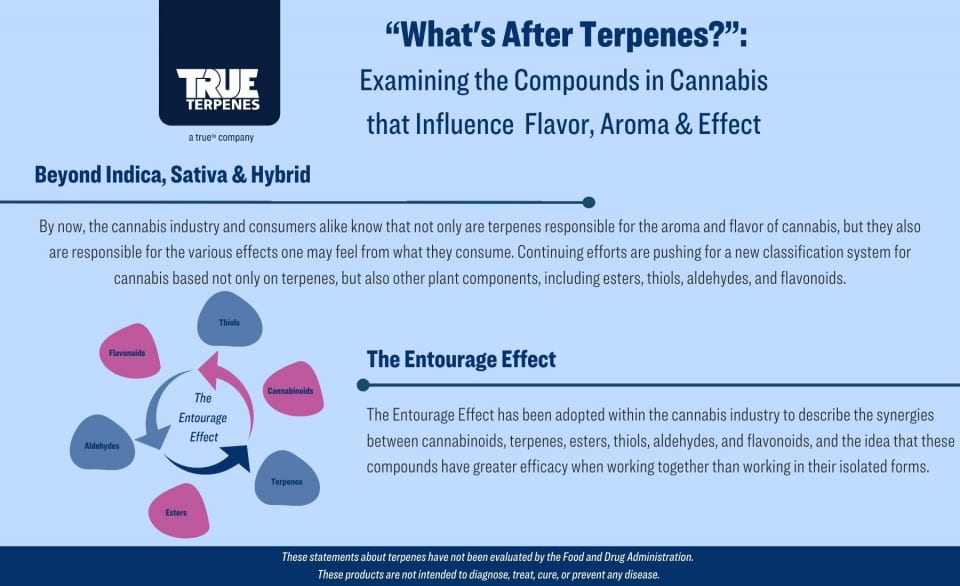 Consumers are increasingly catching on to the role of terpenes in determining the various flavors, aromas, and effects of cannabis. While emphasis was once placed on cannabinoids and who could breed the highest tetrahydrocannabinol (THC) cultivars, terpenes have taken center stage as the compounds in cannabis that make various cultivars unique, allowing the consumer to better target their desired cannabis experience. What comes after terpenes when distinguishing the flavor, aroma, and effects of cannabis? What are the functions of the other compounds within cannabis, and how can they affect the cannabis experience? Here, we’ll do a deep dive to examine what’s after terpenes to break down other plant components, including esters, thiols, aldehydes, and flavonoids. We’ll also touch on efforts that use these various components to create new classifications for cannabis, beyond the indica and sativa binary. 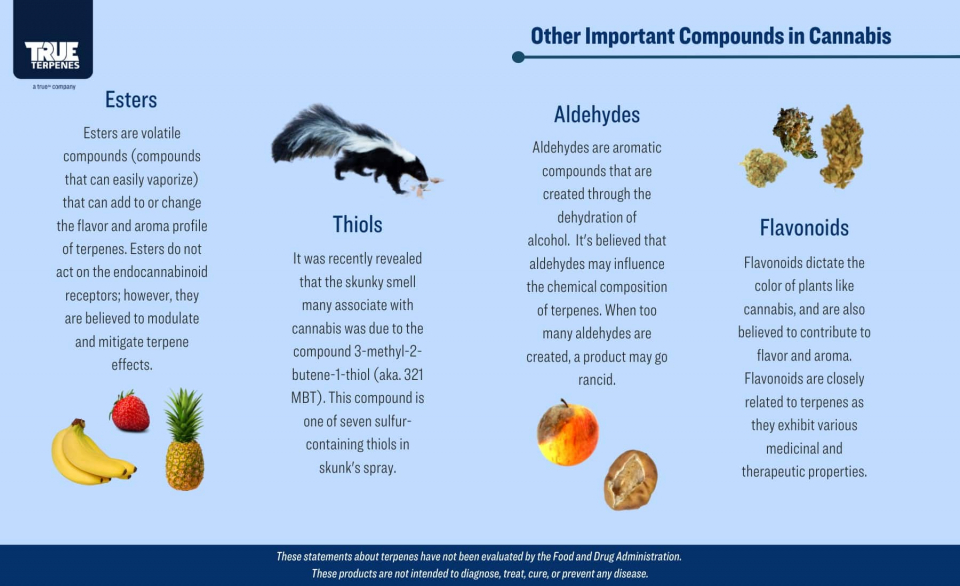 Esters & Their Effects on Terpenes

While terpenes are essential to the flavor and aroma expression of a cannabis cultivar, they don’t get all the glory. Esters are also becoming increasingly important for cannabis geneticists trying to nail down flavor and aroma. Some of the most popular commercial cannabis cultivars boast flavors of banana, strawberry, or pineapple; the similarities in aroma between the fruits and cannabis can be uncanny at times. However, this isn’t due to terpenes but rather esters. Esters are volatile compounds (compounds that can easily vaporize) that can add to or change the flavor and aroma profile of terpenes. When scent compounds enter our nose, they bind to our olfactory receptors in different concentrations and combinations, engaging the brain in scent identification. To use an example, the cultivar “Strawberry Banana” will smell like these fruits due to their esters, not because the same terpenes in strawberries and bananas are in the cannabis cultivar. It’s important to note that esters, unlike some terpenes like β-caryophyllene, do not act on the endocannabinoid receptors; however, they are believed to modulate and mitigate terpene effects.

Many people would classify the smell of cannabis as akin to that of a skunk’s spray. In 2021, scientists at Byers Scientific revealed that the skunky smell of cannabis was due to the compound 3-methyl-2-butene-1-thiol (aka. 321 MBT). Previous to this, it was believed that the skunkiness had to do with terpenes. 321 MBT is a sulfur-containing thiol and is also one of seven thiols found within a skunk’s spray, which directly explains the scent association. It’s believed that the human olfactory system has evolved to detect sulfur-containing thiols even when they don’t exist in high concentrations. 321 MBT is also believed to be in some beers that elicit a skunkier experience on the palate.

Aldehydes: Yet Another Enhancer of Scent

While more research is yet to be uncovered about the exact role of aldehydes in the cannabis plant, these aromatic compounds are created through the dehydration of alcohol. Examples of aldehydes include the vanilla scent from the molecule vanillin or the scent of almonds from benzaldehyde. It is believed that aldehydes may influence terpenes by chemically changing their makeup. It should be noted that not all aldehydes smell pleasant like vanilla or almonds; aldehydes are also created when a perishable product becomes rancid, which is why aldehydes need to be balanced to maintain a pleasant scent. It’s usually recommended that products like cannabis oils are kept cold or at room temperature to avoid degradation and the creation of more aldehydes.

Flavonoids and the Color of Cannabis

Flavonoids make up anywhere from 2-10% of the chemical composition of cannabis, but there is still so much about them yet to be discovered. Flavonoids dictate the color of plants, like flowers, fruits, and the different colors of cannabis buds. [1] Flavonoids are also said to influence the aroma and flavor of plants, but more research needs to be done on exactly how this occurs. The research that exists reveals the therapeutic benefits of flavonoids, with some being investigated for their anticancer, anti-inflammatory, antioxidant, and neuroprotectant properties, to name a few. Because of their similarities in medicinal properties, flavonoids and terpenes work together as part of the magic of the entourage effect in their synergistic relationship with cannabinoids and other components of the plant. 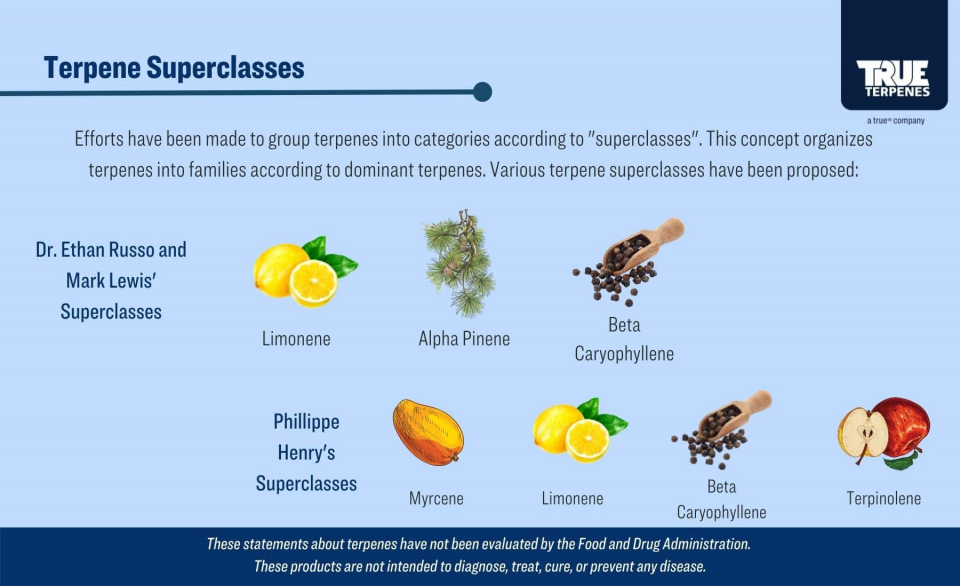 There’s been a significant surge in the understanding of these other components of cannabis as the cannabis industry becomes more sophisticated and realizes that there is a lot more to the plant than THC. Increasingly, cannabis producers are labeling their products by dominant terpenes, and cannabis researchers are looking for ways to use the non-cannabinoids compounds in cannabis to work towards a new classification system for cultivars. Dr. Ethan Russo and Mark Lewis, Ph.D. have proposed terpene “super classes” as a way to group terpenes into families by their effects. Russo and Lewis proposed their classification system begins with using limonene, alpha-pinene, and beta-caryophyllene. Phillippe Henry of VSSL Enterprises Ltd and The Flwr Corporation has proposed a new classification system that hinges on the terpenes myrcene, limonene/beta-caryophyllene, and terpinolene as the terpene super classes. [2] Henry was able to narrow down 18 SNPs or single nucleotide polymorphisms (genetic variations) from 1,400 that could help classify cultivars into a terpene family. In the quest for a better classification system for cannabis, connoisseurs are looking beyond terpenes and continuing to dig deeper to see what other compounds dictate effect as well as aroma and flavor.

More to Be Discovered

With more being uncovered about the different components of cannabis, it becomes increasingly evident that it’s more than just cannabinoids and terpenes that influence the cannabis experience. The good news is that the cannabis industry is embracing terpenes as an indicator of effect, with a noted uptake in consumer interest. As we dive deeper into understanding the compounds of cannabis beyond cannabinoids and terpenes, we can work towards a unified classification system for cannabis that will help consumers with their product choices. For now, there’s still so much we don’t know but are beginning to unveil one cannabinoid, terpene, ester, thiol, aldehyde, and flavonoid at a time. (Originally posted for Terpenes And Testing Magazine on January 11, 2022 – https://terpenesandtesting.com/flavors-aromas-in-cannabis-whats-after-terpenes/)

Looking for Innovative Flavors or to Create a Customized Blend?

True Terpenes leads the industry in showcasing how terpenes can be a dynamic factor in customizing and standardizing the aromas, flavors and effects of its customer’s lifestyle products. With extensive expertise in formulation and application we can help you match, improve or develop custom blends.

Click below to get started on building a competitive edge with terpenes.

Learn More
PrevPreviousIndica and Sativa are Dead: The Quest for a New Cannabis Classification System
NextCreating a Culture: How the Original 4/20 Shapes Our Community TodayNext
Return to Main Blog