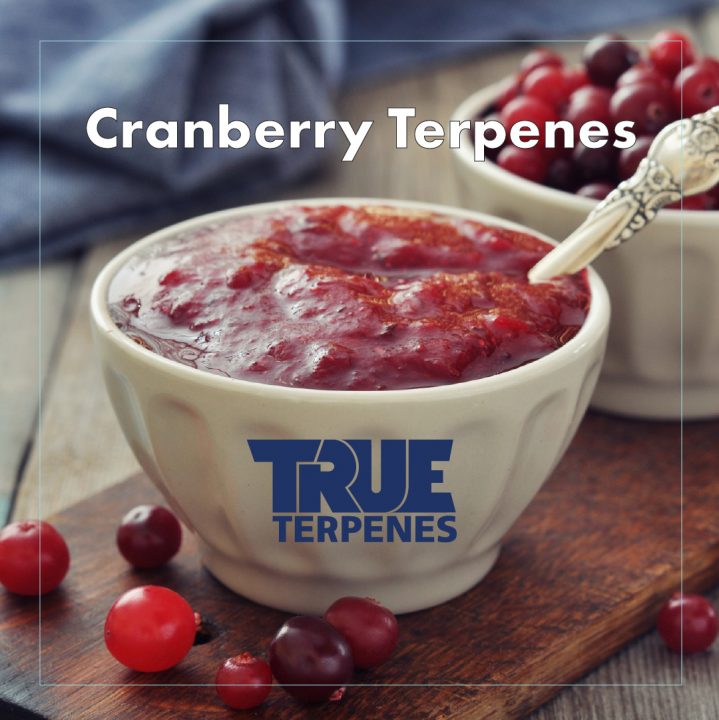 With Thanksgiving approaching it seems fitting to look at what creates the flavor and taste of cranberries – the essential oil and terpene profile.

Two scientists out of Pennsylvania and Massachusetts analyzed cranberries in 1968, and several studies have verified much of their work. It turns out that unlike most fruit juices the bulk of the essential oil of cranberries isn’t terpenes, but a variety of other compounds such as benzoic acid. It accounted for 26.6% of the total volume, and scientists believe it is primarily responsible for the tart taste of cranberries.

The aromatic compounds that make up the largest portion of cranberry are: benzaldehyde (9.6%) which has an almond scent and benzyl benzoate (11.9%) is referred to as having a balsamic odor.

Interestingly the two scientists in 1968 attempted to reformulate the scent and taste of the cranberry with isolates from their lab. This is their account below:

“An attempt was made to duplicate the aroma complex with proportional amounts of commercial reagents. Although this synthetic mixture was somewhat reminiscent of cranberry juice, it lacked the delicate aroma of the natural extract and was easily distinguishable from it. This might indicate the importance to the aroma of the many compounds occurring in smaller quantity that remained unidentified. Over 250 components were visible by gas chromatography, of which only the largest 42 peaks, comprising 95% of the extract, were identified.”

They were definitely on the right track, but it appears more recent science has shown things such as eugenol (clove, peppery), vanillic acid (creamy taste & smell) and cinnamic acid (balsamic scent) are some of the missing pieces that were out of their reach in 1968. Science continues to help us unravel the complexity of the taste and aroma of plants and the rest of our food. At True Terpenes we are definitely thankful for science.