The Entourage Effect of Candles 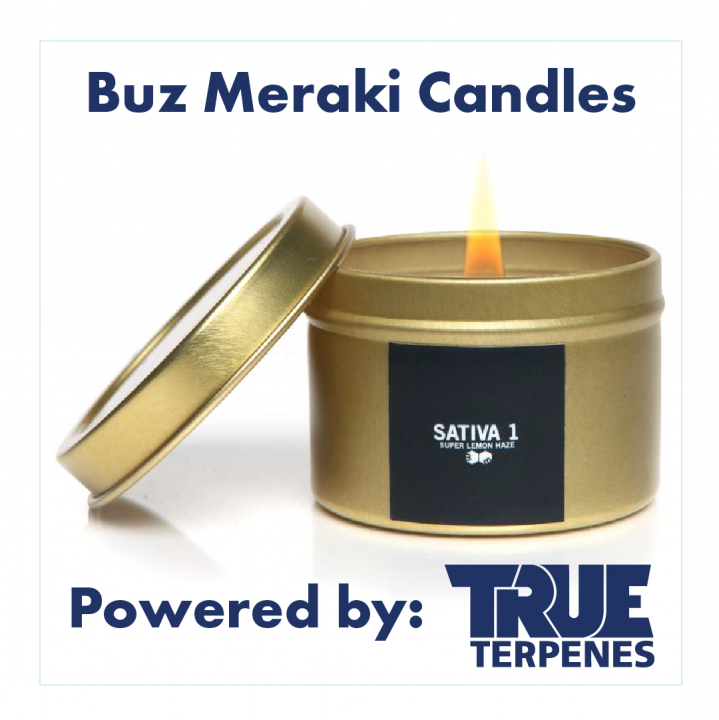 Newport Beach, California’s Buz Meraki is a candle producer that embraces the power of terpenes. At just about a year in the business, the company continues to shape its line as it learns more about this constantly evolving space.

Buz Meraki’s candles are inspired by iconic strains like Super Lemon Haze, Granddaddy Purple and Blue Dream. The idea initially came about after numerous dispensary trips producing the vast amounts of aromas and experiences that came with opening a fresh jar of flow. From there, the vision of capturing these diverse aromas in a candle scent became a vision that would come to light thanks to terpenes.

CEO and Founder Jordan Seggman told True Terpenes how the company uses numerous terpenes while placing a keen emphasis on one in particular: myrcene.

“The reason we chose myrcene is because it’s the most dominant terpene in cannabis strains across the board…” Seggman added, “With this terpene, we can still have candles that work in synergy with cannabis no matter if it’s sativa or indica.”

As well as myrcene, Buz Meraki uses additional terpenes when the product calls for it. Partnering with True Terpenes, the company uses myrcene in addition to limonene, linalool, terpinolene, and alpha-pinene in its blends. Buz Meraki’s candles do not contain any ingredients derived from cannabis, and rather uses pure essential oils, fragrance and terpenes to produce the effects needed for its hybrid, indica and sativa candles.

So far, customer response has been just as planned, with most reporting a combination of soothing and unwinding above all else. Seggman says this is due to the terpenes that “are basically super essential oils,” adding that, “If you compared the ratio of linalool you are getting in our candle compared to a lavender essential oil candle it would blow your mind. You are getting just the good stuff with terpenes.”

To learn more, visit www.buzmeraki.com, where you can buy its terpene infused candles and other products. A rebrand in 2019 is on deck, which includes a portion of all proceeds going towards cannabis research efforts. With a goal of giving back to the plant and community, Buz Meraki hopes to help fill the void when it comes to cannabis education and scientific studies.