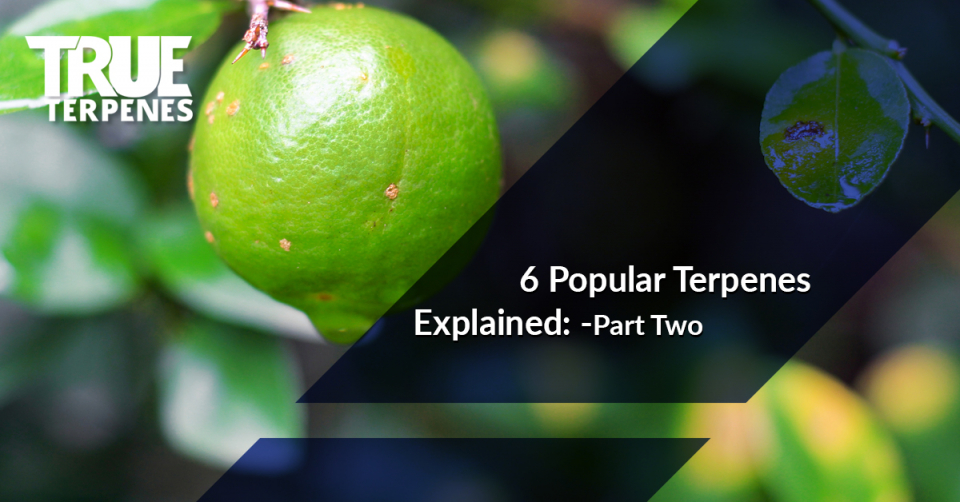 In the last article, we provided an overview of what terpenes are and how they affect the body and mind.

So, what are terpenes exactly? As a refresher, the most common terpenes definition is that they are the botanical compounds found in the essential oils of all plants and are responsible for the aroma, taste, and effects that certain plants, like cannabis, may provide.

While there are at least 120 identified terpenes in cannabis, there are tens of thousands of terpenes that exist within the plant kingdom. In cannabis, however, certain terpenes are more abundant than others.

Now that terpenes are explained, in this second article of our three-part series, we’ll break down three of the most abundant terpenes found in cannabis, and in nature: myrcene, limonene, and linalool. We’ll cover each terpenes’ aroma profile and taste on the palate, some interesting facts about certain terpenes, and what cannabis strains include these terpenes. We’ll also uncover some of the terpene health benefits and the effects of terpenes that are being researched.

Myrcene is one of the most common terpenes to find within cannabis; in fact, myrcene makes up to 20% of the terpene profiles of most cannabis cultivars (strains) you’ll find on the legal markets.

Aroma and Taste
Earthy and fruity with subtle hints of mango and mint.

Possible Medical & Therapeutic Properties
Myrcene is known as a relaxing terpene as it can help loosen up muscles, make you feel calm and sedated, and promote restfulness. In its medical applications, it’s being researched for its anti-inflammatory and pain relieving properties. It’s also believed to hold antibacterial properties.

Limonene is a very popular terpene due to its instant recognition on the palate and its popularity of use in household products, beauty products, and food and beverage. Although you’ll likely find limonene in most “lemon” cannabis cultivars, it can also be found across various cultivars that may not have any indication of lemon in the name at all.

Aroma and Taste
Fruity and citrusy.

Linalool is instantly recognizable as it’s also the terpene that is found in lavender, which has been used for centuries to bring about relaxation. Linalool is being researched for a variety of medical and therapeutic properties, with special attention with how it directly interacts with receptors in the brain.

Possible Medical & Therapeutic Properties
Linalool is crucial for a plant’s own protection, which is leading to more research on linalool’s possible antibiotic properties. It’s been used for centuries in alternative and traditional medicine for its sedative and possible anti-epileptic effects. It’s also linked to a lessening of anxiety and depression. It may also have anti-inflammatory and pain reducing properties.

In our third and final article, we will feature three more common terpenes found in cannabis that are also available through True Terpenes: beta-caryophyllene, alpha-pinene, and eucalyptol.

True Terpenes is an innovation platform for non-cannabis botanical terpenes that enables small and large companies worldwide to differentiate their products through aroma, taste, and effects under the highest safety standards known to our industry.

We empower people to feel precisely how they want to feel through terpenes. Browse our shop to see the available terpene isolates and terpene blends that we have available for companies to infuse into a variety of products.